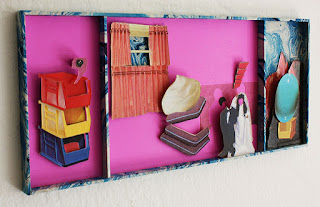 I've posted three new workshop proposals on my website. They all engage with visual narrative, sequence, and collage as they incorporate elements of both creative writing and the book arts. They are adapted from classes I've taught at Mills College, the University of Iowa Center for the Book, and Iowa City Poetry's monthly Free Generative Writing Workshop. Click HERE to learn more!
Posted by Matt Runkle at 6:59 PM No comments:

State of the Art

I finally got around to updating my artist statement! The new version talks more about my efforts in the past few years to synthesize several different modes of working: letterpress typography, comics, zines, collage, and illustration. I copied it below—or you can click here to read it on my website.

Although I work in several different media, I see them all as modes of writing. And when I say writing, I mean the building of narratives through assemblage of fragments. And when I say fragments, I mean the physical, the detritus that combines to form a collage. But I also mean the conceptual, the attempted capture of a thought on a scrap of paper to be put in a drawer for later. When coming across that scrap again, how has its function evolved? It is a contextual challenge. What kind of story does this thought want to build? Or rather what kind of story will welcome it? Or rather what kind of story will, through sheer juxtapositional force, accept this thought against better judgment and, as result of such counter-intuitiveness, flourish?

Because this process involves layering, tactility is important. Also, depth, or rather the illusion of depth, or rather the spaces that confuse dimensions. The book form, then, is ideal: the second dimension gives way to the third with each turn of the page, and the reader’s experience from start to finish takes place in the temporal fourth. And because my process relies on the scraps of narratives past (as is inherent in the process of collaging, of constructing memoir, of altering books), a tension forms between the transitory and the permanent.

Things begin to feel cluttered, though, don’t they? Thus the containment and constraint of prose. There are endless possibilities offered by the interaction of text and image, yet still those typographic fields created by unbroken word-flow keep calling me.  And while bearing in mind the sculptural and temporal effects of a book’s structure, I want to remember a parallel power it holds: the meditative and transportive experience a reader undergoes when surrendering to story. A power dependent on content more than form (as long as the typography has the grace to let you past), it’s one I’m intent on investigating further, while also exploring the many kinds of conversations a text block can have with an image, both within a book’s pages and beyond. I was instrumental in the commercial book design of The Story of How All Animals Are Equal & Other Tales (Brooklyn Arts Press, 2014), while also creating companion images for many of the collection’s stories. Taking the form of collages and letterpress-printed broadsides, these visual pieces partner with the written word, breaking their trance (or perhaps re-casting it) to build extra-textual narratives. And now things grow cluttered again.

I’m digging through drawers of scraps, though—it’s unavoidable. And as I dig, I pull from multiple mediums and genres: comics, zines, literary fine press printing, collage, memoir, fiction, illustration. The places in between these are where things get really exciting, where we see the infinite possibilities of what can happen in the gaps between artifact and story. Synthesis is an ongoing challenge. What formula of mortar will make things cohere (even if just barely)? I’m currently researching historical, commercially motivated, collaborative modes of text + image book production, such as medieval scriptoria and twentieth-century mainstream American comics publishers. As I work to integrate a wide variety of techniques and traditions, I draw inspiration from circumstances where a number of artists (copyists, illuminators, rubricators, pencillers, inkers, letterers, colorists) have allied to do the same.

Catholics is an artist’s book, a limited-edition memoir that makes use of illustration, collage, and letterpress-printed typography to explore the psychic cathedral built by my Catholic traditionalist upbringing. The Hitch: An Agamist Manifesto is an ongoing wedding-themed project that will eventually consist of ten chapbooks of various literary genres creating a variety of visual, tactile, and intertextual patterns. I think of both, by default, as graphic novels, despite their tendencies to wander into dense blocks of prose. They are evolutionary extensions of my autobiographical comic, RUNX TALES, which creates depth and texture through layering, engages with the space between the linguistic and the visual, and experiments with style and layout according to content. As in all my work, I hope the reader feels her way around like I do, that her experience is like my writing process: dimensional, textured, with clues pointing forward, yet shaped by a fragmentary past.

Posted by Matt Runkle at 6:42 PM No comments:

My new artist's book, Catholics, is a memoir that's haunted by three saints, all portrayed by either Joan Crawford or Tallulah Bankhead. The saints—Joan of Arc, Saint Veronica, and Thérèse of Lisieux—are each referenced in the book's anecdotal prose pieces, and the layout of the illustrations is patterned after their prose companions' typographic design. Their layout is also inspired by the quincunx, a sacred formation where one central image is surrounded by four smaller objects at each corner. In Renaissance art, these four objects often represent aspects of the fourfold world: humors, elements, seasons, gospels, or some other system of correspondences. Robert M. Place writes in The Tarot: History, Symbolism, and Divination:


... the symbolic structure of the physical world is used to define the sacred center and frame the image of the divine presence. Buddhists place Buddha in the center of their four-sided diagrams called mandalas and Christians place Christ in the center of the cross or a mystical diagram called a quincunx (165).

The World card is a Tarot image that often uses the quincunx formation; the iconic Rider-Smith-Waite version of The World depicts a dancing woman encircled by a wreath and the symbols for the four Evangelists. I also reference Pamela Colman Smith's depiction of The Tower in one of these saint illustrations and mimic the theatrical background horizon line she uses in many of her images. Place points out that Smith's experience as a theater designer influenced the performative nature of her compositions, where flat background lines often invoke stage backdrops. I wanted a similar feeling of pageantry for these saints and am grateful for Smith's inspiration.

Catholics is a project that is animist. During its creation I’ve tried to tap into the energetic potential of material objects, whether magazine scraps or metal ornaments collecting dust in inherited type cases. The tension between sacredness and profanity that plays out in the book's themes is a reflection of my process as I sought transcendence in tangible bits of detritus. Catholicism is ornately melodramatic, but it didn’t build that baroque on its own: the pagan cultures suppressed by the Church were mined for their sacred objects and images, which were then repurposed to maintain the Roman hierarchy’s power. Each of Catholics' illustrated saints was once a goddess who is now being refracted through my twentieth-century pop cultural lens. 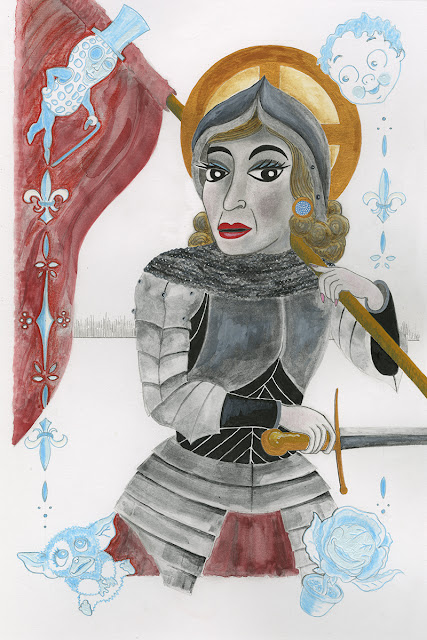 Joan of Arc fends off childlike grotesqueries—are they specters or saints? A little bit of both, actually. As a teenager, I got a glimpse inside my local Masonic Temple when I found work dressing up as Mr. Peanut and a Campbell's Soup Kid at a Christmas party hosted there. And my childhood movie-watching habits were restricted by the National Catholic Office for Motion Pictures, who seemed to dislike campy anti-consumerist morality tales featuring bloodthirsty monsters like Gremlins and Little Shop of Horrors. 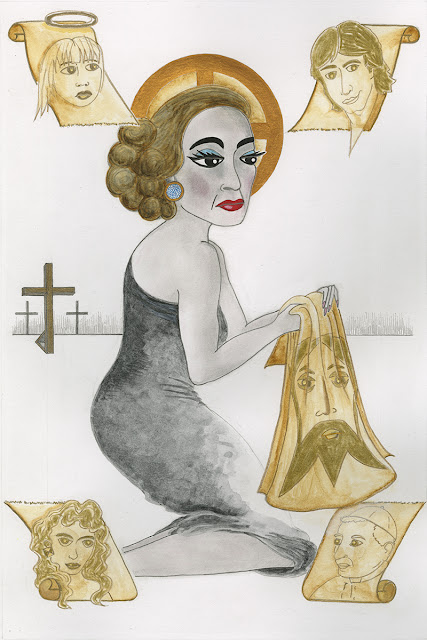 Saint Veronica contemplates icons more crass than the one she clutches: John Stamos and Brooke Shields posing for the cover of a teen Catholic propaganda magazine, and Traci Lords and Pope John Paul II as depicted on some shredded T-shirts my boyfriend referred to as shrouds. 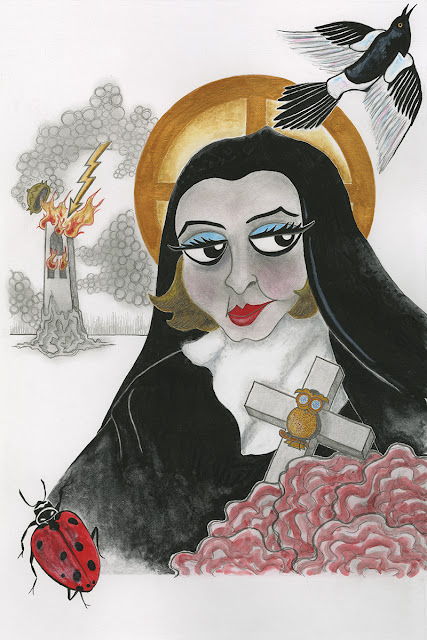 Thérèse of Lisieux, her quincunx rotating into the back- and foregrounds, smiles an epiphanic smile. The ladybug and magpie are animals important to both Thérèse's childhood and mine. The tower in the background is in imitation of Pamela Colman Smith. The crucifix Thérèse holds recalls another saint, Brigit, who evolved out of a Celtic goddess associated with both the nocturnal owl and the solar cross. In the book's final prose section, Brigit, Thérèse, and the memory of my mother all converge to intimate a threefold deity.

More information about Catholics can be found here.

Posted by Matt Runkle at 9:42 AM No comments:

Meeah Williams at sparrowmuffin recently reviewed The Story of How All Animals Are Equal & Other Tales (Brooklyn Arts Press, 2014). She really captures the collection's spirit with a Joe Brainard-inspired drawing of 'Impromptu Nancy,' who sez: 'Different enough to be worth reading.' You can buy the book from Small Press Distribution!

Posted by Matt Runkle at 3:44 PM No comments: