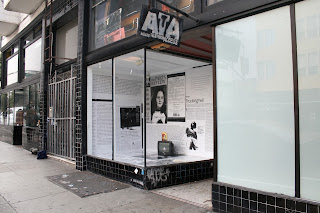 A few months back, one of the display windows at San Francisco's Artists' Television Access (ATA) was packed with a mishmash of photocopied news snippets, photographs, collages, and quotes on the nature of truth. At the center of the display was a TV with the image of a burning book: Sarah by JT LeRoy.
Yes, that JT LeRoy. The teen hustler/literary prodigy who wrote four works of fiction, received accolades, and befriended celebrities before being exposed as a “fake.” LeRoy’s critically acclaimed books, it turned out, had been written by Laura Albert, a woman in her 30s, and his public appearances had been performed by a costumed accomplice.
The backlash that followed was nuts. That image of the burning book is appropriate; a witch hunt would work, too. LeRoy/Albert had simply pissed off too many powerful people. The thing was, what Albert did was something fiction writers do on a daily basis: she pretended to be someone she was not. Who she was and was not, however, remains up for debate. Albert describes LeRoy as a “veil” rather than a “hoax” and maintains that the persona was not simply a scam; rather, he was an avatar created to indirectly express past traumas. Albert, who lives in San Francisco, continues to write and recently explored issues of sexual abuse in an essay on Roman Polanski over at Fandor. Last year she spoke about her experience as JT LeRoy on The Moth.
The window at ATA, Untitled (Persona Case Study), explores some of the complex issues of identity raised by the case of JT LeRoy. It was created by Jasmin Lim, an artist who has developed a close bond with Albert. Lim is no stranger to questions of perception. Her photographic experiments have featured altered perspectives via slight manipulations such as folding and tilting. I love the tactile nature of Jasmin’s work and am fascinated by the layers of identity involved in the case of JT LeRoy, so I was excited to get to ask her some questions. She talked about her relationship with Albert as well as the ATA installation, which at some point she hopes to adapt into a zine.
Laura has talked about JT LeRoy as being a coping mechanism, a kind of way of dealing with past sexual abuse, as well as an integral part of her creative process. In this way, JT seems to straddle several dichotomies, one of which is that of healing/destructive figure. Do you see destruction as being key to the creative process, either as initiator or result? What about healing?
I think for many of us, especially when you grow up around abuse, violence is normalized, and when we choose to redirect that energy, it is healing. Laura often quotes writer David Milch, "People say that my writing is dark. And for me it's quite the opposite. It sees light in darkness and it doesn't try to distort darkness. The essential thing is that the seeing itself is joyful."
Art can be a practice of deprogramming ourselves. Like the Indian deities Shiva and Kali, destroyers of illusion. They grant liberation by destroying illusions of the ego.
Do you have a relationship to JT LeRoy? Is he a presence for you in your interactions with Laura?
Yes. He is a manifestation of Laura’s inner world, and I feel the contradictions and complexities she embodies are important to explore.
One of the most interesting parts of the conversation you and Laura had in August [a panel discussion at ATA moderated by Chuck Mobley] was when she talked about the photo of her as a child wearing a T-shirt that reads “I Want to Be Me.” There’s something so haunting about this image and the way Laura discussed it in the context of identity. Can you talk a little about this?
She said that her mom had her wear that shirt, but at the time, “being me” was the last thing she wanted. At the same time, it was the thing she wanted most without realizing it.
There is an excerpt I included in the window, by theorist Jose Esteban Munoz, about survival strategies the “minority subject practices in order to negotiate a phobic majoritarian public sphere”. It describes the contradictions we negotiate in forming our identity, like identifying with something that you are simultaneously in conflict with; because we absorb ideologies around us, we become a site of conflict.
Of course at her core, Laura really did want to be herself, but the external pressures to conform were often louder. 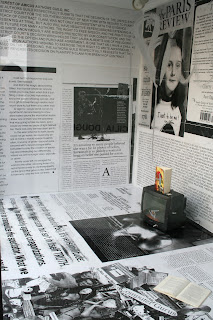 There are several other quotes from theorists featured in the window. Can you talk about the significance of some of these?
There is a George Steiner quote that says, “It is not the literal past that rules us, save, possibly, in a biological sense. It is images of the past. Each new historical era mirrors itself in the picture and active mythology of its past."
This quote is like theoretical biologist Stuart Kauffman’s concept of the "adjacent possible," that the “complex systems best able to adapt are those on the border between chaos and disorder.” The adjacent possible describes both the limits and the creative potential of change; that we can only work from the framework that currently exists; that innovation is a recombination of what we already know. And everything we do increases the possibility of what is possible next. So imagining that there are realities beyond what we are capable of perceiving right now gives us room to perceive something beyond literal truth.
The Jorge Macchi quote says, “I’m absolutely against categorizations. Their function is to tranquilize the spectator."
Both of the quotes describe how focusing on literal “truth” neglects a deeper meaning. If we allow for ambiguity, then more complex understandings can develop as previously separate ideas coalesce.
Another quote is from the Authors Guild, regarding the lawsuit brought against Laura and what it means for authors who want (or need) to write under a pseudonym or anonymously. There is a clear miscarriage of justice here that will have ramifications for the literary community, yet I rarely hear it discussed. Can you talk about this?
The production company, Antidote International Films, bought the rights to Laura's book Sarah. After her identity was revealed, they didn’t want to just adapt the book anymore—they wanted to make what they called a "meta-movie, like Being John Malkovich," incorporating Laura's life into her fictional book. Laura said no, and they sued her for fraud because she signed the contracts as JT LeRoy—even though the contract signature does not change the fictional book they purchased.
They spent four times more on the case to supposedly recover the cost of optioning the book. Laura's case became a principled issue to demoralize her. During the court case, the plaintiff's lawyers said they wanted her to "behave." Somehow the ambiguity was threatening to the president of the production company, who made an example out of Laura to retain his sense of power. That they won sets a precedent. The Authors Guild amicus brief for Laura's case states, "the district court's decision which holds that Laura Albert's use of pseudonym breached the Option and Purchase Agreement, is one that will have a chilling effect upon authors wishing to exercise their right to write anonymously." 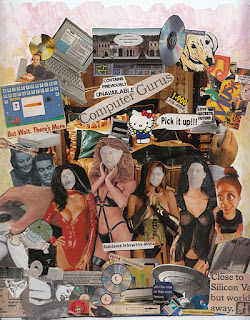 
It’s similar to how the information in the window operates. There is so much information that I continue to understand it differently as I change and the world changes.
Can you talk about some of these juxtapositions that happened as you were assembling the window? Did anything become clearer to you through pushing separate fragments of writing together?


When I immersed myself in the materials, it seemed like nothing made sense; each individual piece had many layers within it, and combined with other pieces, you could draw infinite associations.


I couldn't make decisions about what to exclude. This response seemed appropriate. The framework that I normally position things in became more fluid and open, and there was less hierarchy because each article or excerpt took approximately equal real estate. In this way, the concept became about how we process information, how we restrict our perceptual potential, and how reframing shifts our interaction with information. 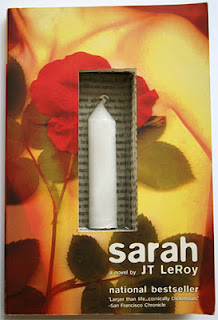 The window’s centerpiece features a copy of Sarah hollowed out with an unlit candle inside. A couple years ago, you engaged with the book/movie Looking for Mr. Goodbar in a similar way, creating an image of a hollowed out paperback copy of Mr. Goodbar with a candle inside. What led you to approach these two works in this way? Are there thematic similarities between Mr. Goodbar and Sarah?
Both Sarah and Looking for Mr. Goodbar have protagonists who can't be themselves in their cultures/environments. Both of these books are also expressions of real events: Sarah is a figurative expression of Laura’s experience with trauma and abuse, and Mr. Goodbar is both a book and a film inspired by the brutal murder of Roseann Quinn.
Posted by Matt Runkle at 10:34 AM