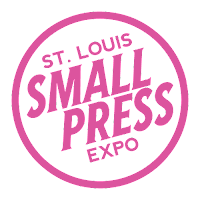 I'm excited to have work included among the fantastic roster of artists represented by the Drift Plain Collective! The DPC will be tabling this Saturday, September 26th at the St. Louis Small Press Expo, taking place at the public library's Central Branch. From the DPC's website:

Posted by Matt Runkle at 4:48 PM No comments: 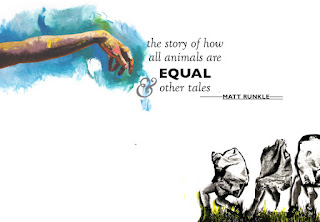 Anna Mebel wrote a new review of The Story of How All Animals Are Equal & Other Tales for PANK. About the two main characters in the titular story, Mebel says, ‘Runkle finds the tragedy and beauty in such mismatches—he treats relationships as collage.’ She also writes, ‘Runkle mixes fairy tales, love stories, satire, dystopia, prose poems, and careful observations of the ordinary.... The stories in the collection are driven by unfulfilled desire and the weight of unexplained, mysterious pasts.’ You can find the book over at Small Press Distribution.
Posted by Matt Runkle at 5:41 PM No comments:

Email ThisBlogThis!Share to TwitterShare to FacebookShare to Pinterest
Labels: fiction, PANK, publications, reviews, short stories, The Story of How All Animals Are Equal & Other Tales

Fragmentation is the rule 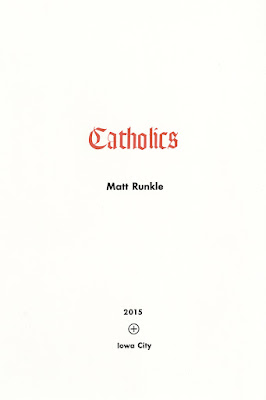 For an artist's book, Catholics is unusually prose heavy. While I’m fascinated by the endless possibilities created by the interaction of text and image, I find unbroken blocks of prose equally compelling. Prose builds the meditative and transportive experience a reader undergoes when surrendering to story. A trance happens, one dependent on content more than form (as long as the typography has the grace to let you past). At the same time, despite its pathological tendency to wander into dense blocks of prose, I also think of Catholics as a graphic novel. The book’s images fill roles equal to its prose: drawings, collage, and images built from typographic ornaments serve as thematic counterpoints to the text.

But still, they remain separate, text on one page, image on another. There is a power, though, in turning that page and seeing the other side of the coin. Haptic agency connects two divergent ways of receiving information. My zine-making background causes me to privilege the chimerical results of collage: no matter how certain it seems that two scraps belong together, tactile cues identify them as separate entities. The places in between (between pages, between scraps) are where things get really exciting, where you can peer into the gaps between artifact and story. Fragmentation is the rule—a dictate that’s not so radical, really: the separation of text and image characterizes what is often dismissed as that most conventional genre, the livre d’artiste. 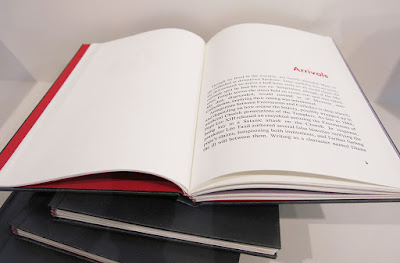 The eight prose sections included in Catholics are both anecdotal and informational. Their design is a nod to twentieth-century trade publications—books, but also periodicals. In these sections, magazines and newspapers recur as central objects, and the tell-all nature of the book’s subject matter often feels worthy of the scandal sheets. Because of this, I’ve drawn inspiration from the designers, compositors, and printers who once worked to produce mass-market ephemera. The prose sections are letterpress printed from The Times New Roman type, cast and set by M & H Type. Their titles and folios are printed from handset Spartan Heavy type selected from the University of Iowa Center for the Book’s Type Lab collection. 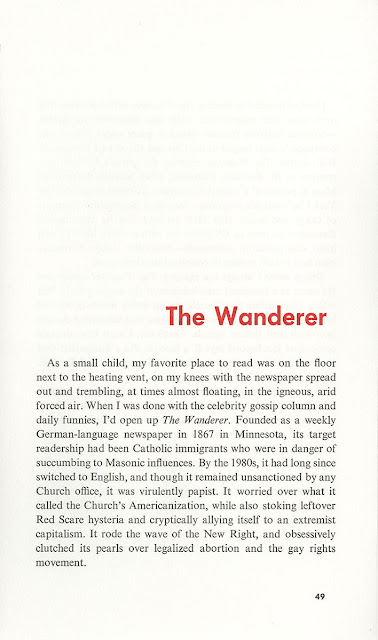 The book's prose sections are the origin points for exploring a range of subjects including Catholic-Masonic tensions, the fervency of converts, the legacy of the Legion of Decency, and the spiritual significance of revelatory shrouds. They relate my religious upbringing as they join with the book’s images to braid several themes: Church history, pre-Christian mythology, and the places where such spiritualities resonate with twentieth-century pop culture. In Catholics, text and image, the sacred and profane, the humorous and tragic, the zine and literary fine-press all end up as strange bedfellows in desperate need of confession.

You can learn more about Catholics here!
Posted by Matt Runkle at 5:05 PM No comments: