I presented as part of a panel last weekend at the Popular Culture Association / American Culture Association National Conference in Chicago. The panel, titled Material Culture in Print: Graphics, Books, and Ephemera, explored several print and design-related subjects included in the conference's material culture topic area. My co-panelist Alyssa Anderson (Brown University) looked at Art Spiegelman's articulation of post-9/11 trauma through narrative disorientation in In the Shadow of No Towers. And William Coleman (UC, Berkeley) explored the significance of the racial other in a contemporary downhill skis design that incorporates nineteenth-century works of art.

My paper looks at two twentieth-century narratives that originally appeared in serialized form—In Cold Blood and Twin Peaks—and the outside texts and material objects they spawned, which sometimes offered insight into questions their original texts left unanswered. The abstract is below:


Serials have traditionally occurred at moments of new media, claims Roger Hagedorn in 'Technology and Economic Exploitation: The Serial as a Form of Narrative Presentation.' Not only do new media use serialization to establish audiences, they often rely on tie-ins with established media formats to win over readers and viewers. This paper will examine two cases of twentieth-century serialized, intertextual narratives that complicate this model: Truman Capote’s novel In Cold Blood and David Lynch and Mark Frost’s TV series Twin Peaks. These two texts first appeared in serialized form in established media formats at moments when their venues were objects of both critical approval and wide public appeal—In Cold Blood in mid-century The New Yorker, and Twin Peaks on ABC at the threshold of the 1990s. Like many serials, they achieved mainstream success in part by appearing in installments that cultivated a sense of anticipation. And despite the lowbrow reputation the serial traditionally has, they were also met with enormous critical success. This essay will examine how their initial presentations were key in this: their publicly eccentric creators both played with generic conventions, and created tension between high and low culture. It will also discuss how the intrigue generated during these texts’ serialization outlived their seeming narrative resolutions (the hanging of the killers and the answer to “Who killed Laura Palmer?”), as both In Cold Blood and Twin Peaks went on to spawn extra-texts—to be supplemented, retold, and re-imagined in various media formats.

Amze Emmons has posted a write-up over at Printeresting of the recent Queer Communities in Print portfolio exchange that was exhibited at Adobe Books Backroom Gallery in conjunction with the SGC International conference in San Francisco. Check out the photos! 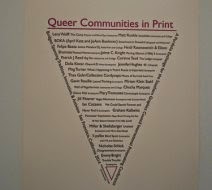 What is A Lament? It's a unique-edition full-color flexagon zine housed in a Japanese portfolio. Digitally printed on Domestic Etching after a failed attempt at printing on cardstock, it uses collage, handwritten proclamations, and a Wizard-of-Oz color/b&w shift to explore the idea of how 'every other dimension is better than ours except for one.' 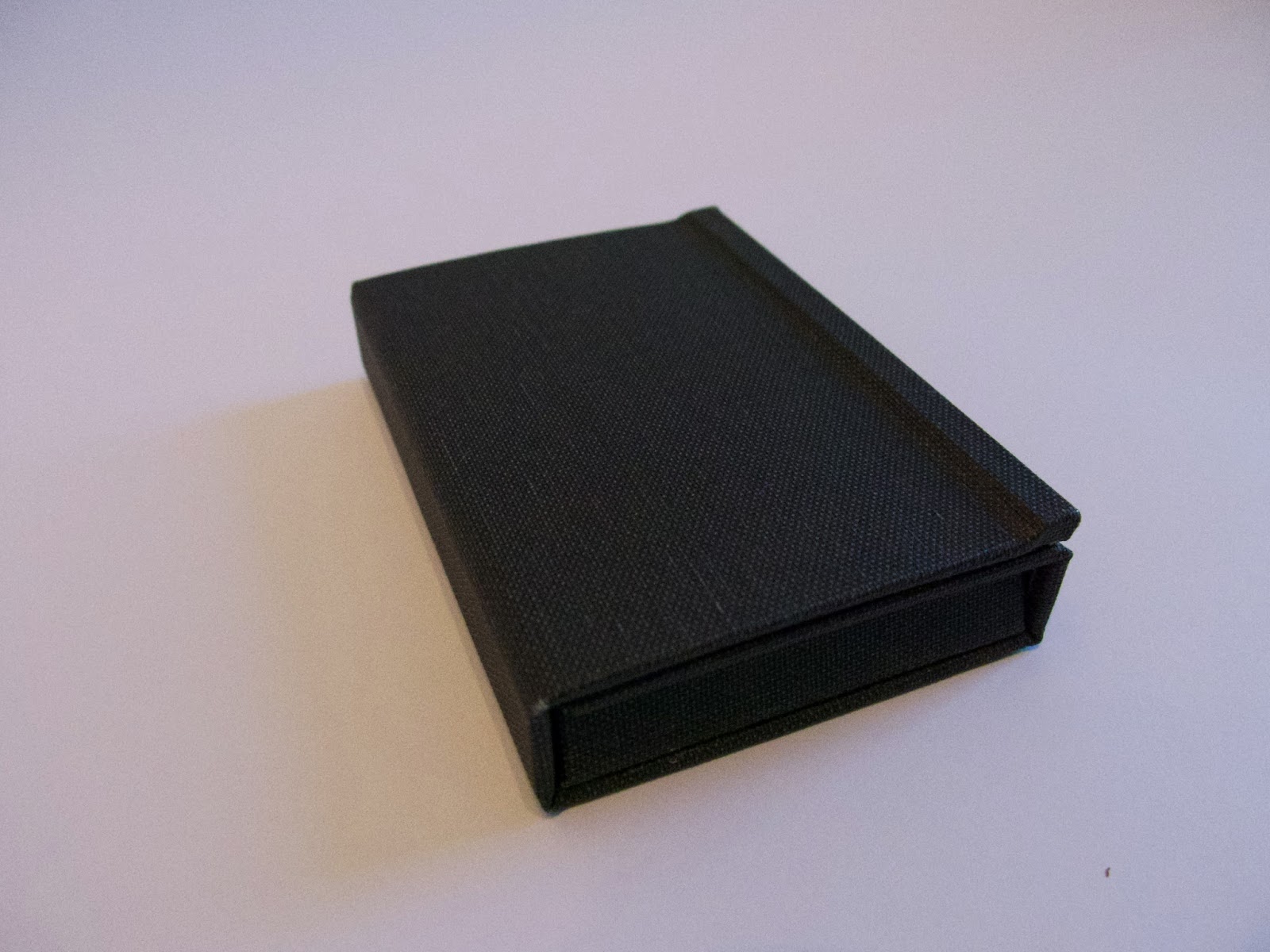 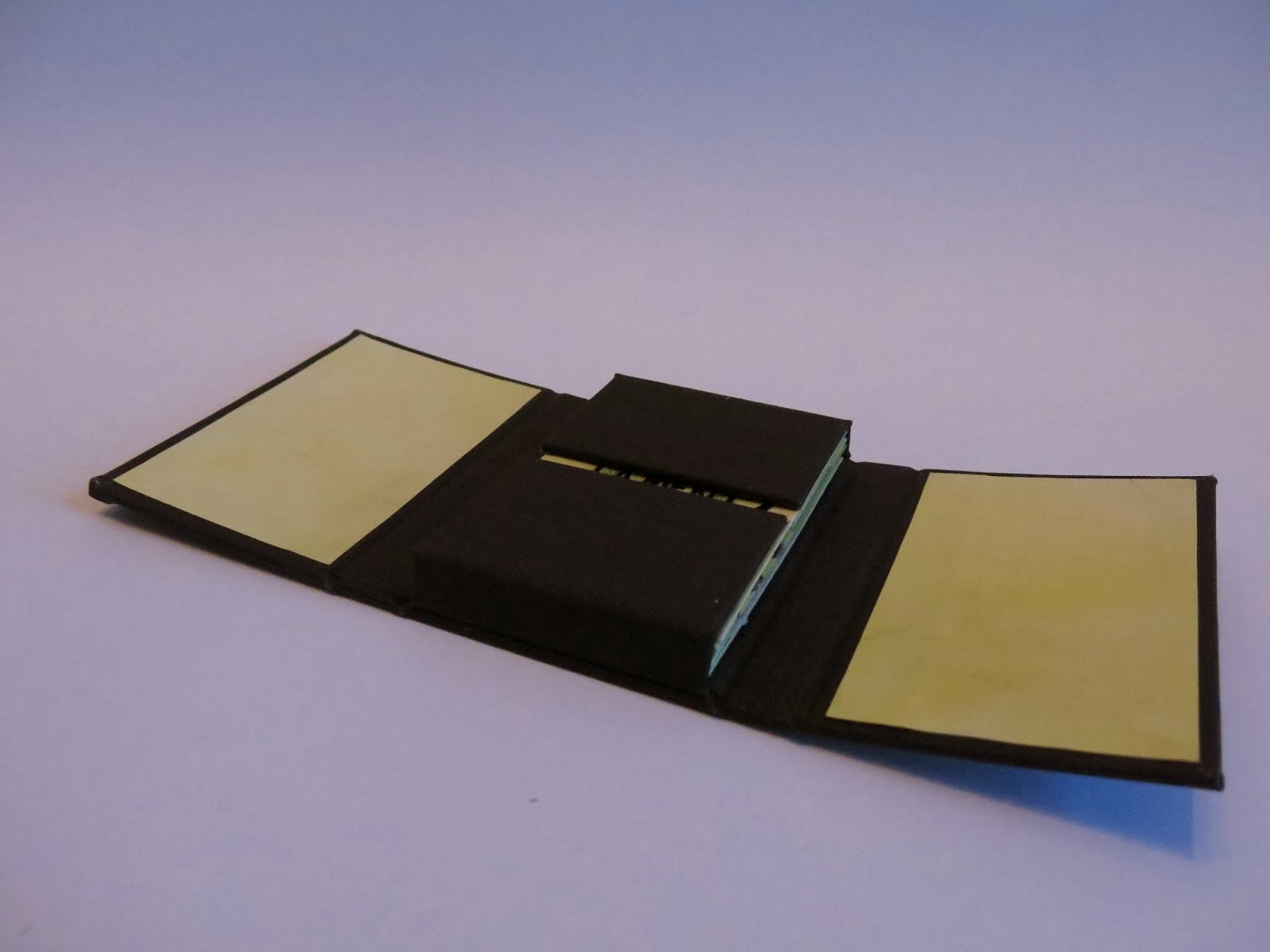 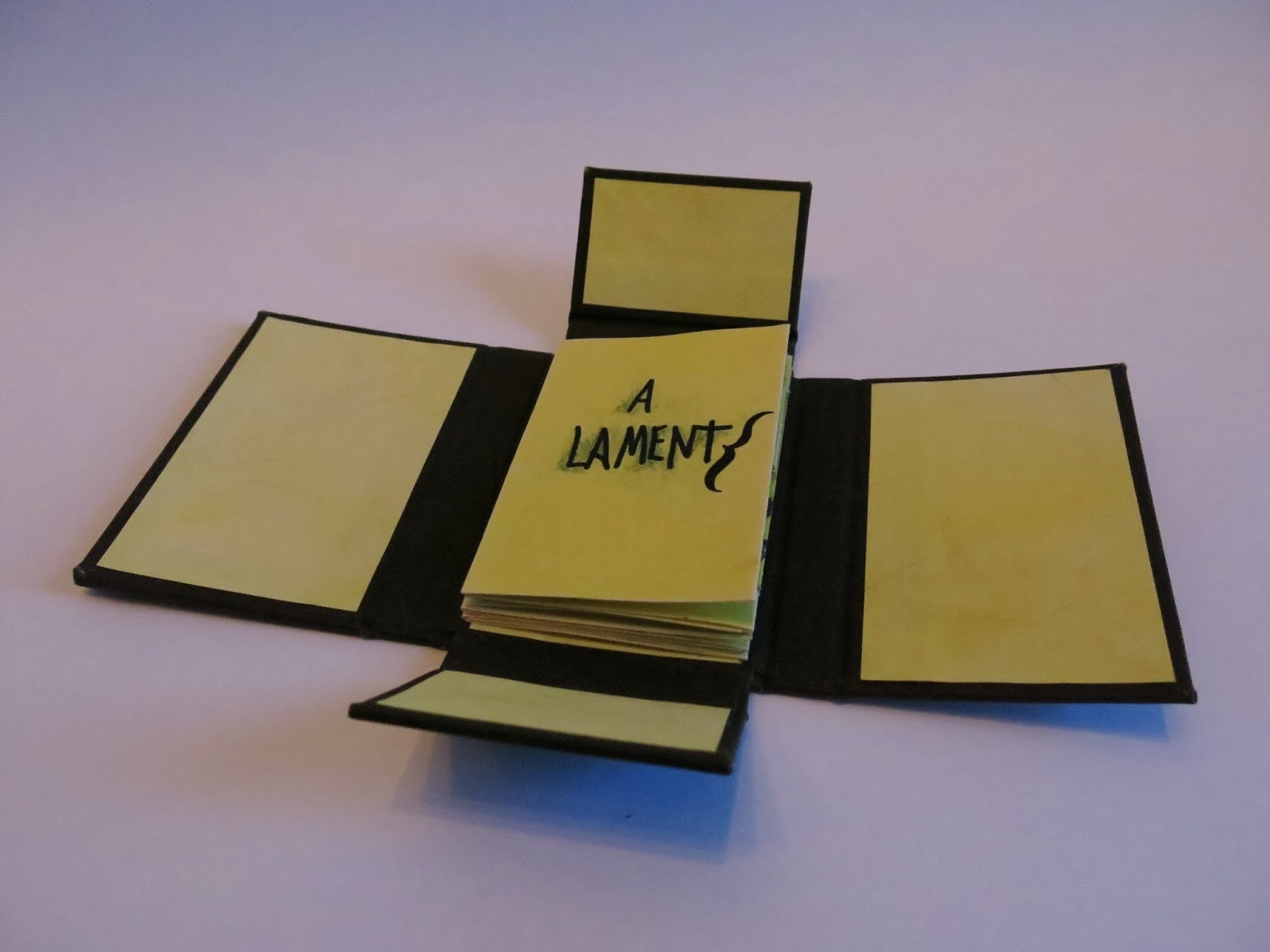 The portfolio, which includes a magnetic closure, is covered in black buckram with pastedowns featuring hand-watercoloring and pencil scrawls. The piece's zine-like composition and appearance of haphazard construction contrast with its overbuilt case. I basically wanted it to look like a pile of trash inside a professional shell. Although not practical, it could be editioned, which I might do in the future if there seems to be some unexpected surge of interest. 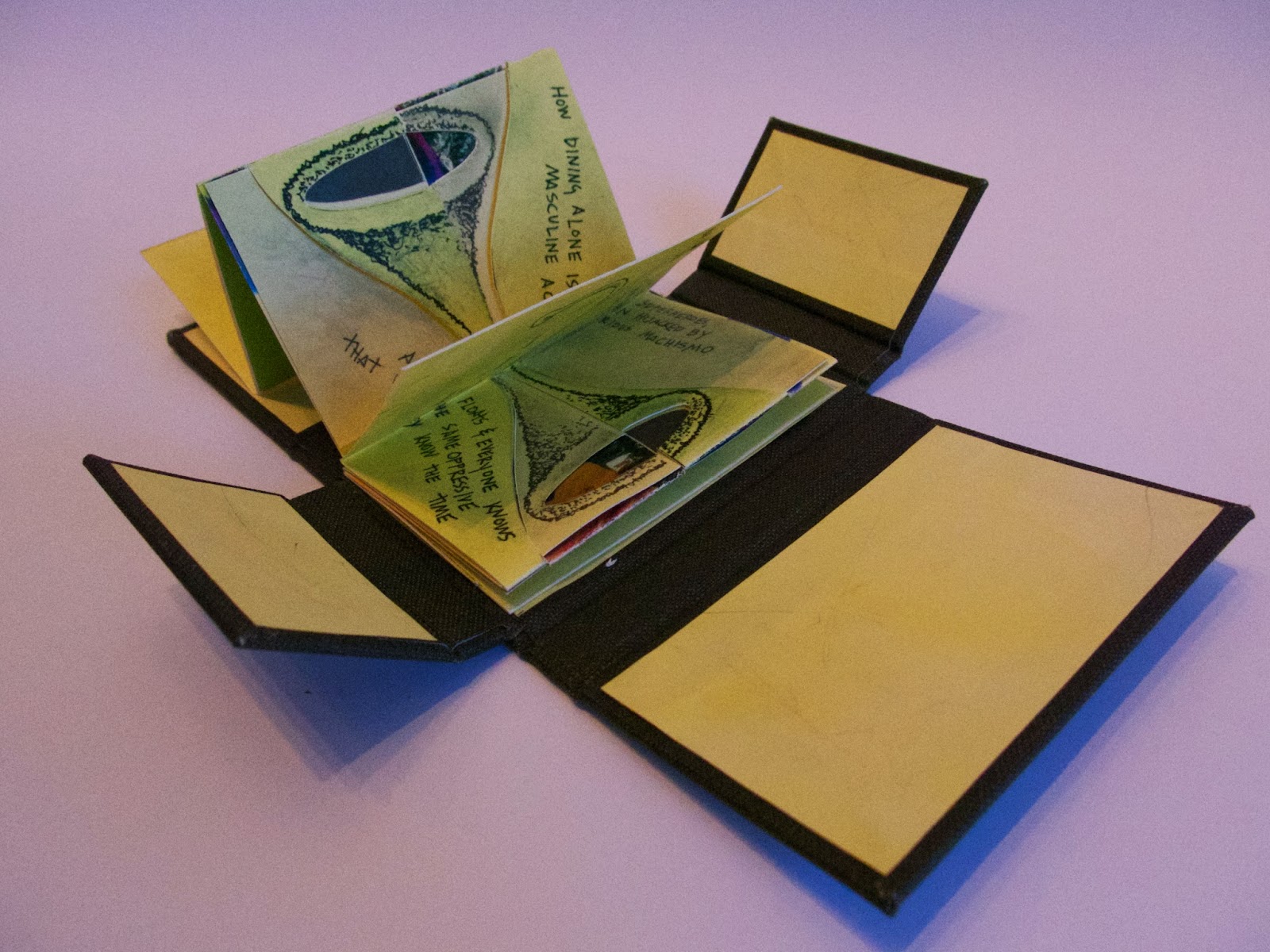 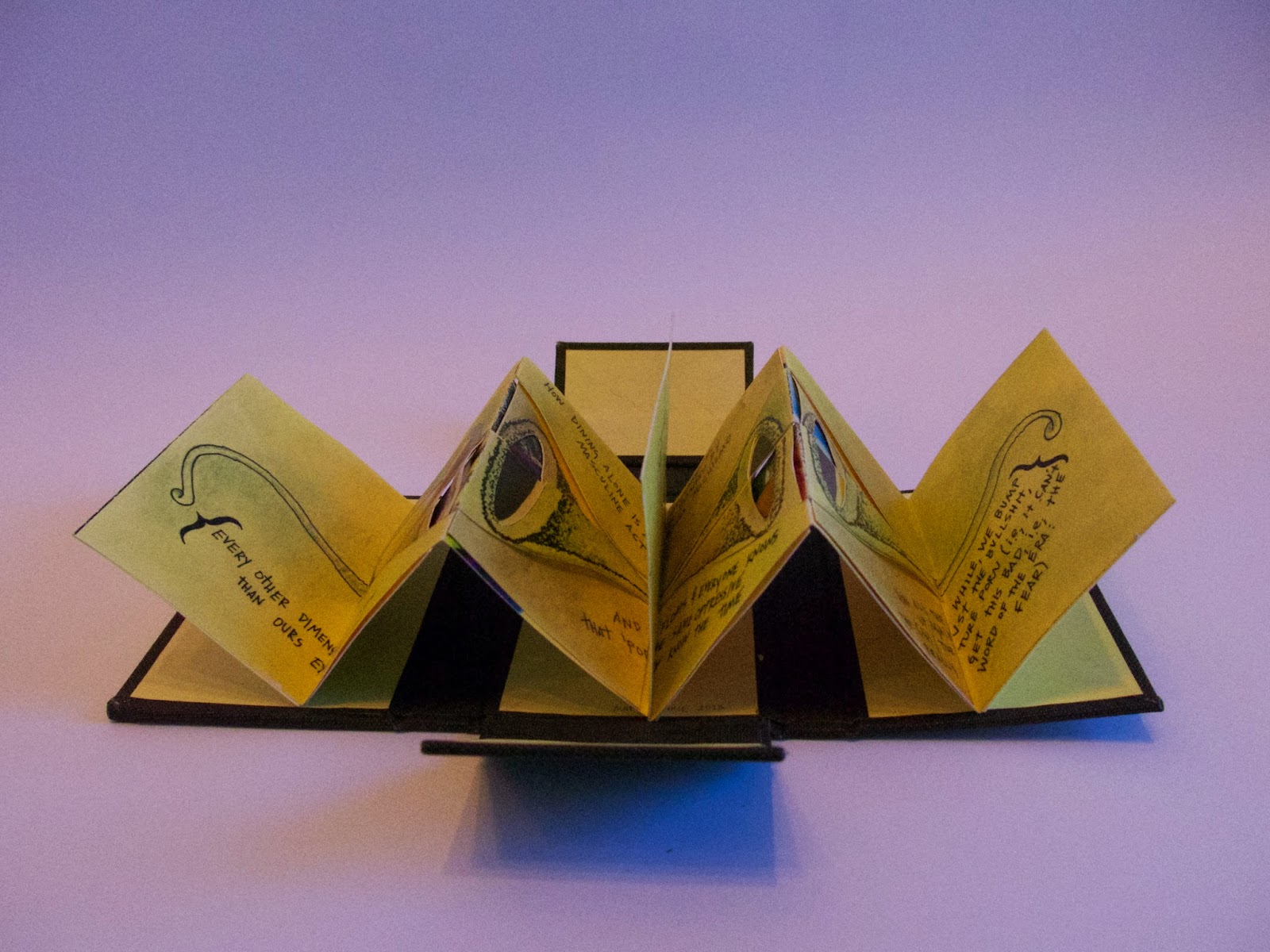 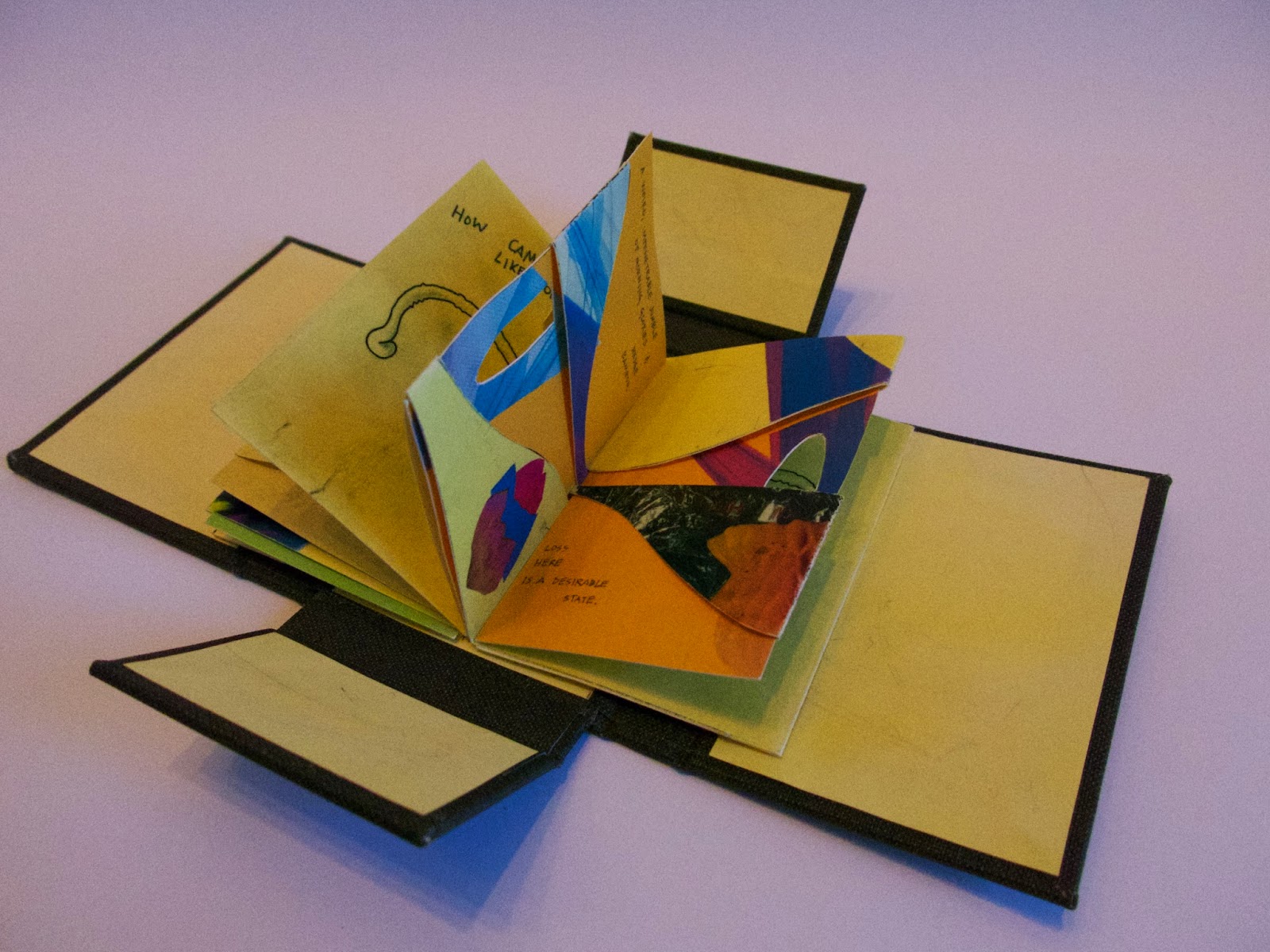 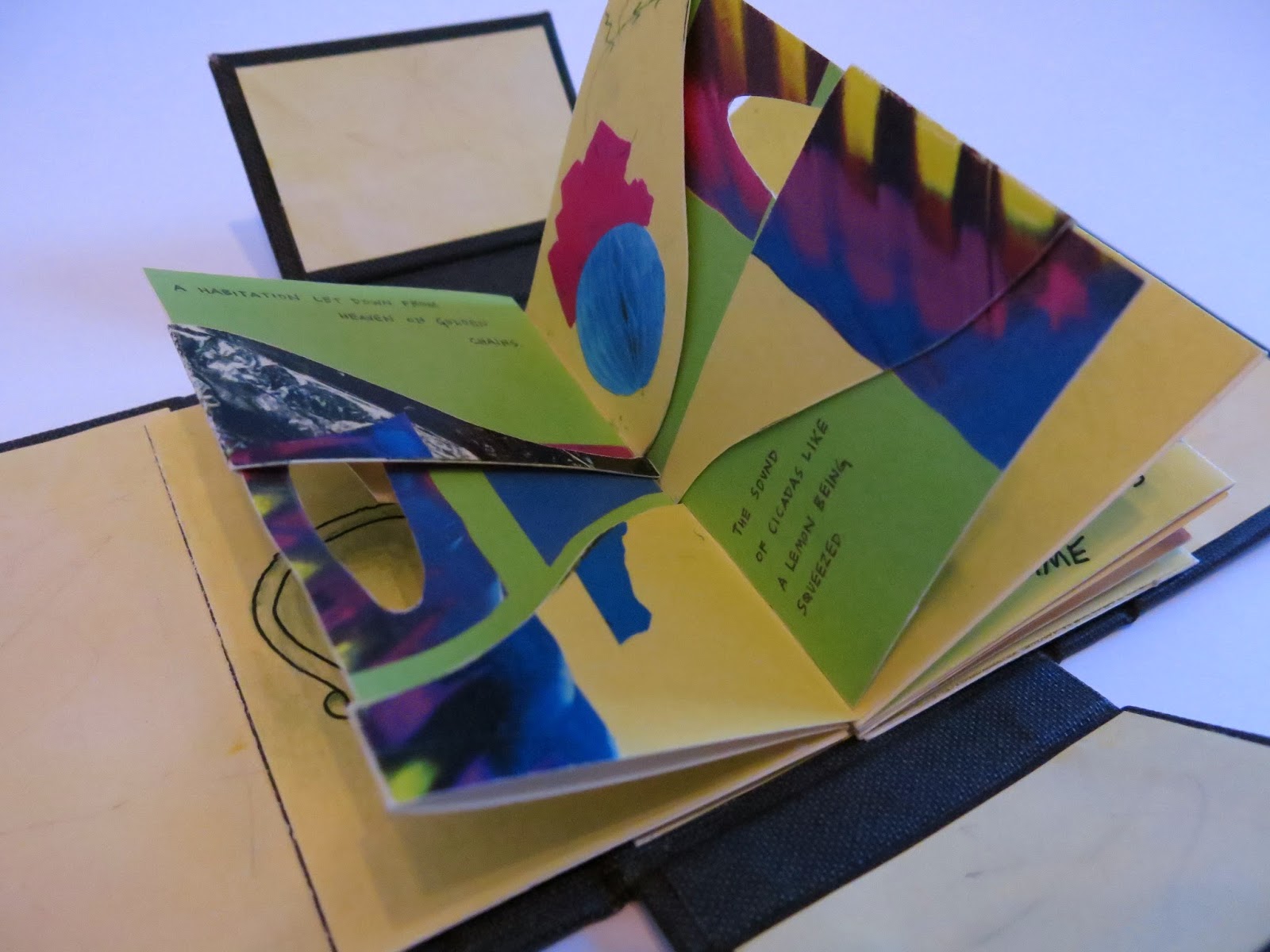 'A habitation let down from heaven on golden chains. / The sound of cicadas like a lemon being squeezed.'

A Lament was featured this last January as part of Peripheral Shifts, a UICB-focused group art show at Quad City Arts in Rock City, IL. I'm now trying to figure out how to settle its generic confusion—a non-editioned zine / an underwhelmingly crafted artist's book / a hexagonally-paneled comic / a poem interrupted by texture and color? And that ultimate question: how to make this something that's actually an accessible, readable thing here in this dimension, the one that's worst of all except one?
Posted by Matt Runkle at 8:51 AM No comments: