I’ve grown used to spending Christmas alone. There’s something therapeutic about it, and I’ve learned to really embrace the lows. I’m not looking for pity; I enjoy this way of celebrating. I’ve cultivated my own family-unfriendly rituals, stockpiling frozen pizzas and bottles of wine. Sometimes I join my friend Janelle for her Christmas-day tradition of seeing the shittiest movie in the theaters (Yogi Bear: The Movie; Alvin and the Chipmunks: The Squeakquel). These are some pretty consumerist traditions—I won’t pretend otherwise. Yet there’s something weirdly purging about such solitary, small-scale binges. By the time the holiday’s over, I feel refreshed.

This year, I caved for a family Christmas. My boyfriend has a generous, welcoming family who lives in suburban SoCal and who really embodies the Yuletide spirit. They’ve invited me to join them in the past, and I’ve turned them down in favor of my usual solo Christmas. This year, though, I decided to see what all the fuss was about.
It’s about presents.
I knew this, of course. I was a child in an American middle-class family, and spent a lot of time circling things in the Sears catalog. I watch TV, I see the wish-list fervor, I see the reports of injuries and mania that ensue in the rush of the holiday sales. I love to get gifts, myself, and while I could really take or leave Shopping, I like giving gifts, too. But, goddamn, the presents.
We spent a lot of time opening gifts. I mean, a lot of time, to the point where we were long past the point of feeling loved, where we weren’t getting things we needed anymore, but rather bracelet after bracelet, cologne after bottle of cologne, reindeer after nutcracker after angel. Because Santa and the gang were going gangbusters, Christmasland was out in full force (a kitsch that seems so cliché it’s not even kitsch): Caroling snowman families. Miniature ragtag pageants. Santa-capped puppies. Angler elves with baubles on the ends of their poles.
On the drive back to northern California, we made a stop at a thrift store, where all the holiday trinkets had been crowded onto a half-off table. In among the polar bears and wise men and sugarplum snowglobes, sat a holi-deity like none I’d ever seen. It was a Santa, not a Saint Nicholas or Father Christmas, but that twinkly-eyed, cotton-bearded type who was first drummed up by Clement Clark Moore. He had the black boots, the fur-trimmed jacket drawn close to his potbelly by a shiny belt. He looked jolly. But here’s the kicker: rather than red, he was dressed head to toe in blue. Blue Santa. I felt like I’d discovered some undocumented species of bug.
The variety of consumer goods is just that great.
Has the actualization of human desires become so perfected, that the diversity of trinkets has surpassed that of nature? Meanwhile, the number of plant and animal species that disappear increases each year. We sit around a tree, a dead evergreen—always—an evergreen that slowly sheds its needles. Perhaps someone hands us a gift-bagged ornament: a giraffe, the evolutionary marvel of its neck bedecked with twinkling lights. The giraffe, in all its evolutionary wonder, has somehow become entangled as it reaches for that star at the top of the tree.
And like that giraffe, with our everlasting plastic and our distant nations full of barely existing slaves, we too, reach for the star, or stars rather, until Christmas becomes about seeing how many shiny things we can hold in our hands. And once we have too many to keep track of, we panic.
We are panicking, right? We just don’t want to say so for fear of ruining Christmas?
And that’s why I like to spend the day alone. At least when I’m alone, I can create a psychic cap. There are only so many bottles of wine I can drink without dying, only so many pizzas I can fit in the freezer. There are only so many classic cartoon characters they can convert into CGI blockbusters, right? Only so many sequels they can squeeze out of each before one loses money.
And Santa—that most generous of spirits—Santa can only give so much before he drains himself blue.
Posted by Matt Runkle at 3:57 PM No comments:

The Long Awaited Fall of the Triangle Fruit Company 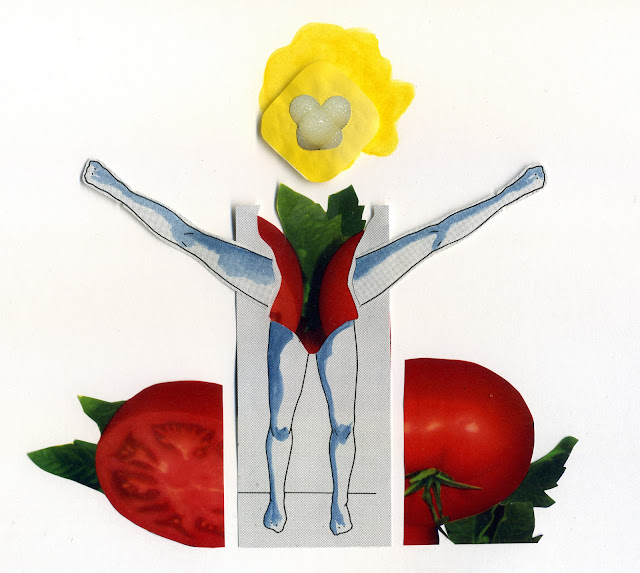 Posted by Matt Runkle at 1:32 PM No comments:

Email ThisBlogThis!Share to TwitterShare to FacebookShare to Pinterest
Labels: collage

Katarzyna Bazarnik and Zenon Fajfer are a Krakow-based duo that coined the term liberature, a literary genre that focuses on the physical form of a text. “The term we coined for this kind of writing,” the couple says, “points out that it is nothing else but literature in the form of the book (one meaning of Latin liber), liberated from any literary and editorial conventions (another meaning of Latin liber)—it is a kind of ‘book in freedom’.” Baxarnik and Fajfer have released a series of liberatic titles under the Liberatura imprint for Korporacja Ha!art publishing house. They recently toured the US, where they participated in a “Liberty Poem” at an Occupy Wall Street action and visited Mills College here in Oakland as artists in residence. They graciously answered some questions for me this month, which are posted at San Francisco Center for the Book’s blog:
The Liberating Bond: An Interview with Katarzyna Bazarnik & Zenon Fajfer
Posted by Matt Runkle at 7:22 PM No comments:

When I was in my early 20s and at the height of my intellectual hubris, I made a zine. It was called Now It’s All Behind You—appropriate, right, for something you pick up again years later and feel really embarrassed about? The whole thing is vaguely themed around physical space (and by extension, time), from comics about maggot real estate to artsy analyses of industrial displacement in Eraserhead and Daydream Nation. But the feature that’s really stuck around—both for the shame it causes and because it articulates a way of thinking I still haven’t outgrown—is something called the Pedestrian Manifesto.

Have you ever tried to write a manifesto? Well, this was my only stab at it, and I have to say it was kind of fun. I can feel it when I read it today: as cringe-worthy as it is, there’s actually a sort of energy that makes me want to keep going.

I may have been young and dumb, but I was smart enough to take a certain precaution: Irony (after all, this was the late ‘90s; what other stance could I really take?). I knew the other meaning of the word pedestrian, and how at odds it was with the urgency I was trying to create, as well as how perfectly that other meaning described the style of most political screeds. So excuse me while I pat my younger self on the back.

Because there’s A LOT in the Pedestrian Manifesto that’s not so pat-worthy. I make questionable use of quotes from Wim Wenders’s Wings of Desire to advance my argument. I write lines like this: “How can the modern-day walker … waltz drunkenly amid the urban confines of right angles?” My levels of condescension are at an all-time high. I don’t allow for the privilege inherent in walking, and for the existence of physical disabilities. I also don’t get much further than a lengthy introduction before bringing out that lazy old standby: To be continued . . .

But, yes, irony: here you are, just like I knew you would be. Here to represent, to offhandedly deflect my shame. Because I didn’t really mean it!

And because all the while I must have secretly believed I would outgrow this idea.

It’s hard to approach a utopian project without a certain level of ironic distance. Humor is protective. The levels of dysfunction and cruelty are staggering, the odds unbelievably low. I’ve been watching, a little at a time, Chris Marker’s protest documentary, A Grin Without a Cat, and have come away from it pretty discouraged. Patterns are on display here—popular calls for change and resulting state suppression—patterns we’re once again in the midst of repeating. But there is hope still, there in the moment, just before the cops show up with their scowls and their batons. And while A Grin Without a Cat is far from being laughably earnest, its disconnect is not to the extent that it doesn’t mean what it says.

But: By simply envisioning a different world, will it come to fruition? No. Especially if your utopia is as logic-less as mine.

Maybe utopias aren’t meant to physically exist, at least not in the ways they’re first imagined. And perhaps they’re better conjured, anyway, through a series of letters rather than a systematically propagandic presentation of logic. Especially, I guess, for a brain that’s twelve years further frayed.

So this utopia—the one I’ve named Pedestrianica—is a personal place, but it’s not exclusive, and while I’d like to see profound changes in the way we move, I’m not trying to start a movement (or am I?). When it comes down to it, I guess what I’m hoping for is some sort of confirmation I’m not nuts. Perpetually hyperbolic, yes. But not nuts.

Is it nuts to address a letter to a carless nation?
Posted by Matt Runkle at 5:33 PM No comments: 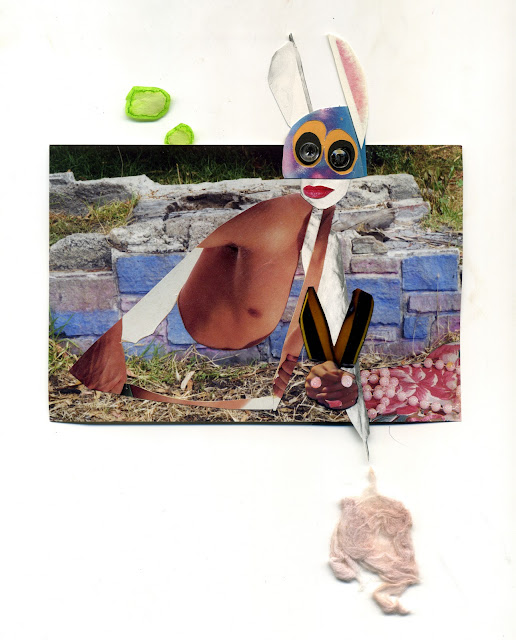 Posted by Matt Runkle at 9:37 AM No comments:

I recently had a great conversation with Michelle Embree, who posted it over on her brand new blog. Michelle and I were neighbors years ago in New Orleans, and she tells an anecdote about rescuing my artist's books from mattress-discounter junkies. Since then, Michelle has gone on to write a novel (Manstealing for Fat Girls) and two plays. Her play Hand Over Fist, which is about a quartet of post-Katrina con artists, was winner of the Saints and Sinners Literary Festival playwright's competition. I hope to talk to Michelle soon about the narrative magic of Tarot.
Posted by Matt Runkle at 6:58 PM No comments: 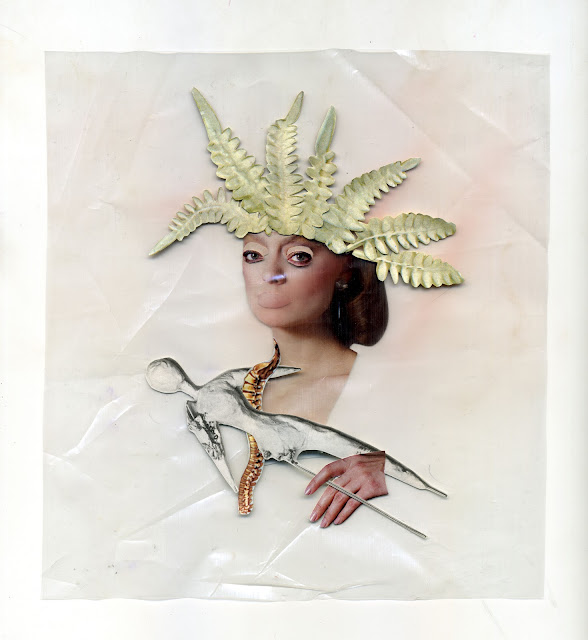 Here are two collages in celebration of my short story, "Warmth," which appears in the new issue of (what else?) The Collagist. The story is a Christmas-themed, fabulist, homosexual tragedy that was inspired by Depeche Mode's song, "Pipeline." Its villain is loosely based on Sarah Palin. Read it here. 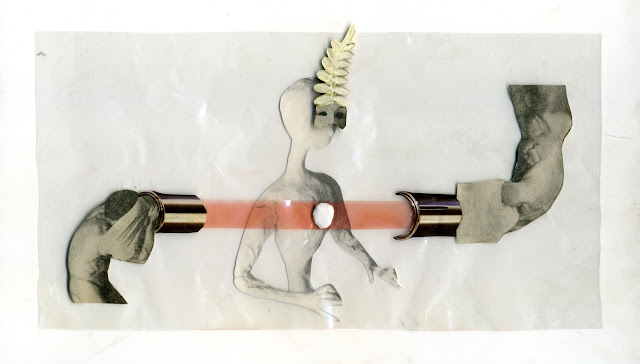 Posted by Matt Runkle at 9:58 AM No comments: 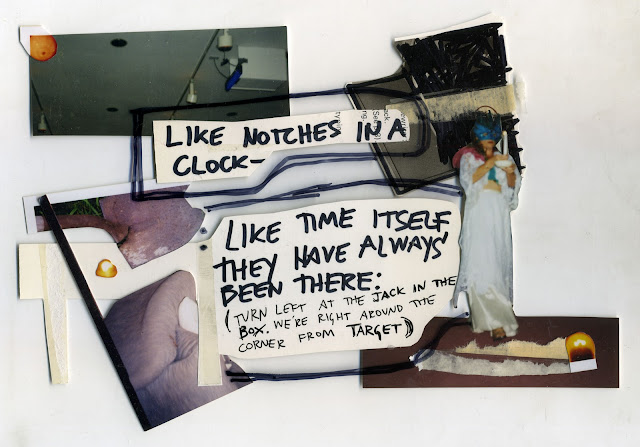 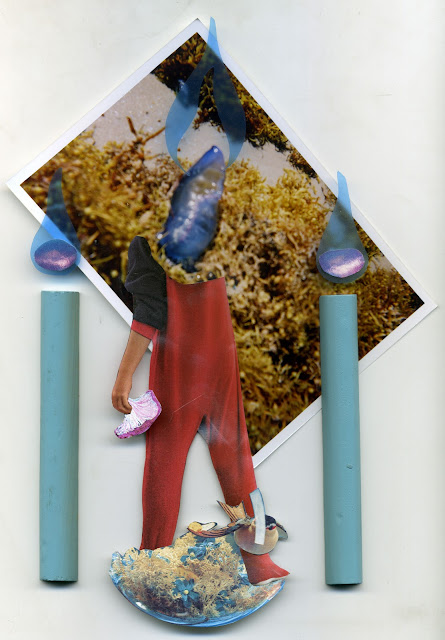 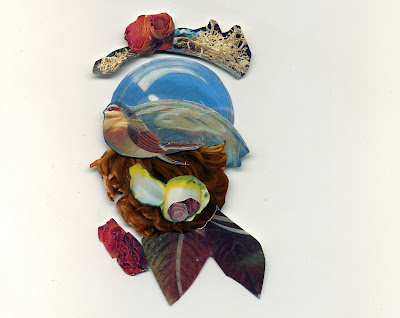 Posted by Matt Runkle at 3:06 PM No comments: