21. COLUMBUS WAS NAMED FOR THE DOVE

The Story of How All Animals Are Equal & Other Tales looks nothing like a regular book of comics. It makes no use of frames, gutters, bubbles, or even actual pictures. Deceptively designed to look like a book of short stories, Runkle’s collection is secretly comics—delightful, textured, twisted little graphic beasts unlike anything I’ve read/seen before.

Springer teaches graphic texts at UC San Diego, so it was an honor to hear she finds the book’s stories so visual. My writing often takes explicitly visual forms: comics, broadsides, artist’s books, and other fusions of text + image. So when I choose to stick to pure prose, I try to do everything I can to make things seen. It really is a compliment that my efforts became ‘twisted little graphic beasts’ in Springer’s eyes. 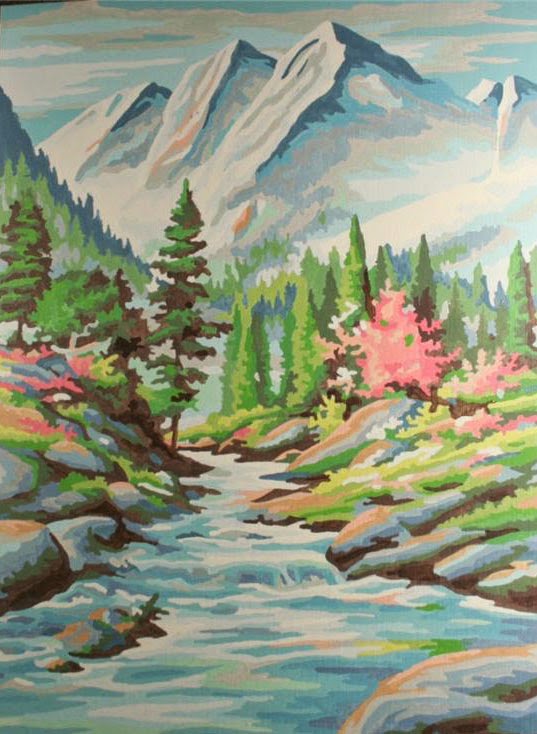 When I wrote ‘Columbus Was Named for the Dove’, I had a palette in mind: I thought of the pastels that happen in paint-by-numbers, the formulaic, impressionistic—almost parasitic—little outlines the artist fills in with powder blue and carnation pink, the dip of the brush into one of those little connected acrylic-filled cups. Such an environment longs for tension: rather than be imprisoned by it, though, embittered public school teacher Mrs. Trent created it, years ago on a wall in the faculty lounge. In the anaesthetized wake of a school shooting, she wonders to what extent her creations ripened the building for violence.

At least that’s how I pictured it. In What We See When We Read, Peter Mendelsund asks, ‘What is the author’s role in hemming in the boundaries of our imaginations?’ Should we include those little acrylic-filled cups or not? Is creating an authorly color scheme a launchpad for the reader’s imagination or is it tyrranical to tell them what to paint in which shape?

Similarly, Mrs. Trent wonders, 'What, after all, is a teacher’s duty? To prevent violence? Or simply to present it as it is?'

‘Columbus Was Named for the Dove’ first appeared over at Monkeybicycle. You can also read the story in The Story of How All Animals Are Equal & Other Stories. Brooklyn Arts Press is offering a special giveaway tie-in for the first 50 people who order the book from their website: a free limited-edition broadside that I designed and printed. Each broadside is an adaptation of a story from the collection—get one by ordering the book HERE!
Posted by Matt Runkle at 9:56 AM

Email ThisBlogThis!Share to TwitterShare to FacebookShare to Pinterest
Labels: Anna Joy Springer, Columbus Was Named For the Dove, gun violence, Monkeybicycle, Peter Mendelsund, The Story of How All Animals Are Equal & Other Tales, visual narrative, What We See When We Read